Did you know deodorant isn't regulated?

We all assume we can safely rely on the regulatory standards of our nation to look out for our best interests, but there is a giant void in the space where body product regulation should fall.

The truth is, anyone could decide there's a competitive advantage to having arsenic in deodorant or face wash and no one would stop them. Until people began getting sick and then went to the effort to prove that they were sick due to that ingredient, then approach the government, arsenic IS allowed in body products. It leaves a gaping hole in the space where we all thing we can trust the system just a little bit.

BHT, phthalates, parabens, aluminum, etc...we all learned about them AFTER a bunch of people got sick and the system reacted. Most regulatory behavior is proactive, not reactive. And that's why we're creating a natural deodorant that is actually so natural, you could safely drink it. Please don't. But you could. It wouldn't feel great (we add salt and bitter teas to stop such shenanagins, but it won't cause any lasting harm). *Please DO keep it out of reach of children. The extreme alcohol content could be problematic for tiny people whose livers aren't fully functional. **Just don't be that guy, the one who drinks his deodorant. Not cool

All that aside, the governing body that oversees what you put on YOUR body is you. When we realized that, we felt a bit hopeless. Until we realized we could do enough research to solve our own problem. Alcohol alone wasn't enough to make lasting, effective deodorant. But we had a baby on the way and a mission to make sure we weren't harming her when we protected the olfactory comfort of those around us.

It's Up to You

If you don't understand what's in your deodorant, it's safe to decide not to use it. That was our final decision. So, you have three choices. 1. Educate yourself about each ingredient you're putting on your body and decide if you trust the body of research that's gone into each one. 2. Use products that contain ingredients you already understand. Check out our ingredients page if you want to know more about what's in Pit Liquor. 3. Decide it's too much work for now and keep going as you are. I'm not here to tell you that's the worst choice. I have BEEN THERE. I founded this company with Jason because I was in that place exactly and he thought we could do better. Don't beat yourself up about it. Do what you can, and don't make yourself crazy about the rest.

If you decide to go all natural, there's a bit more you might want to know. Keep reading to learn about detoxing facts.

Do you know the facts about armpit detoxing (and more importantly, the myths)?

Most deodorant companies sell you a line about detoxing. The fact is, you don't need to detox unless you've been using aluminum-containing deodorant. And detoxing is simply the act of not giving up when you pits stink until they stop doing so. It's not a fancy mask or a new product. We think you're smart, and we know actual facts about deodorant are hard to uncover, so we're sharing our research with you. We want you to make informed decisions more than we want you to come to our conclusions. So read on and decide for yourself.

The most important thing for an effective detox is using a science-based NATURAL deodorant with ingredients you recognize. 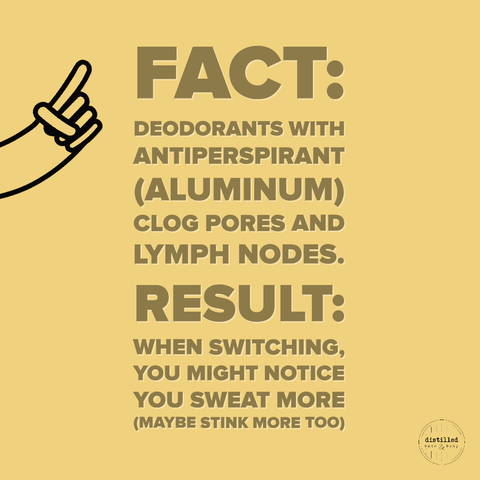 The most important thing for an effective underarm detox is using a science-based NATURAL deodorant with ingredients you recognize. 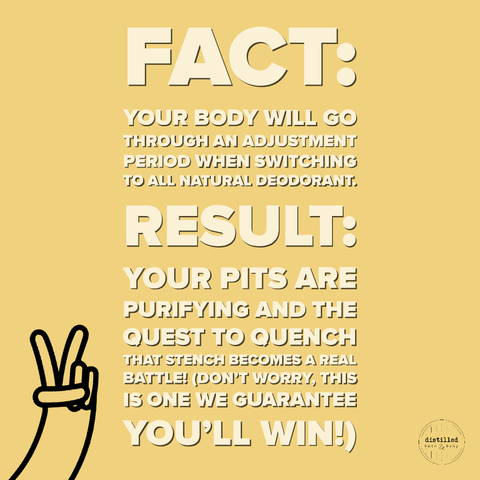 Get something that actually KILLS bacteria without also harming humans. 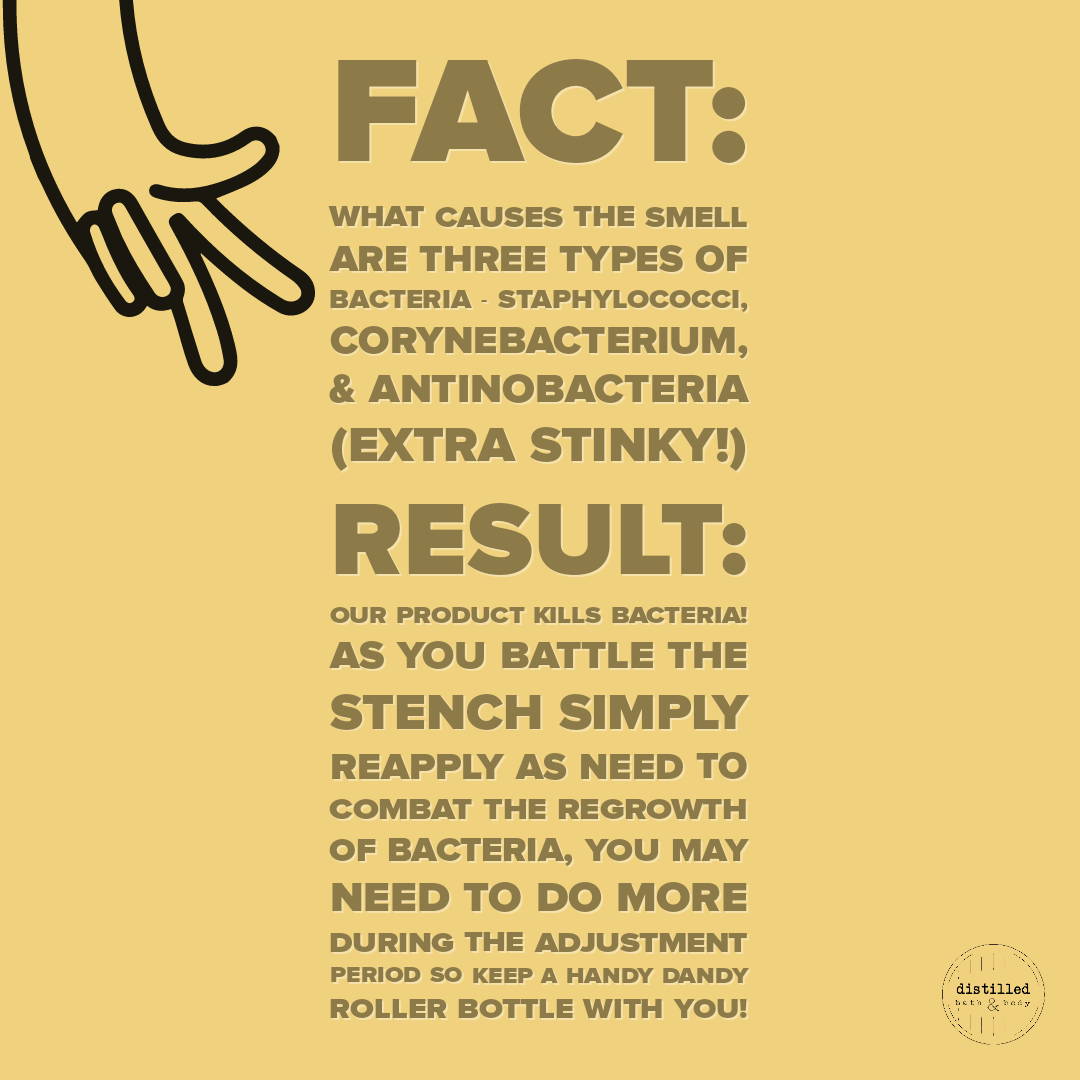 Stick with it. Apply extra if you need to during the extra-stanky times (about 2-3 weeks). Sweat lots. Go to saunas and Get. That. Sweat. OUT! It's literally cleansing your pores and cleaning out your body. It's gonna stink until the crap is gone. It's okay. You're human. So are we. Humans smell sometimes. It'll end. It WILL END. We've all been there. 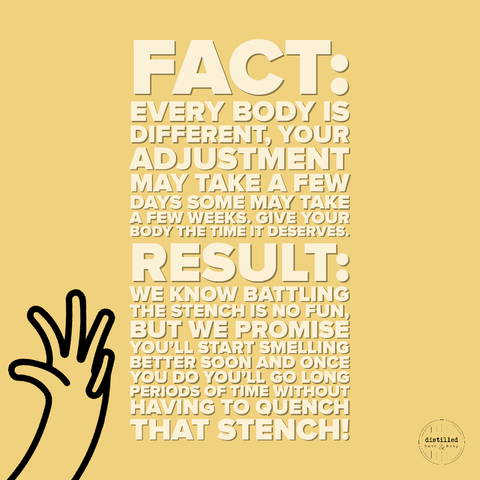 Girl (or guy), wash your shirts...with hot, hot water and make sure you kill bacteria in the pits of shirts, undershirts, and bras. 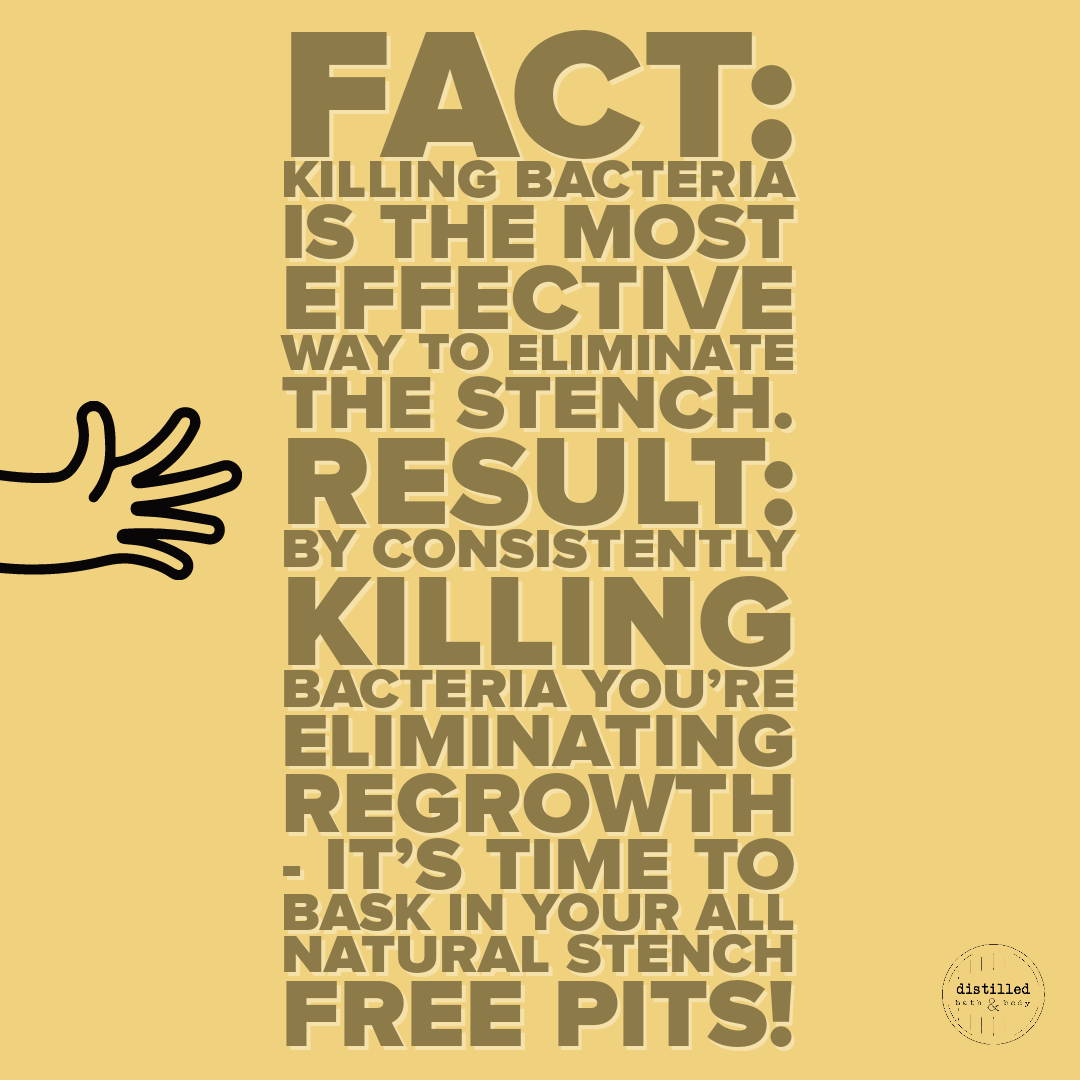 Keep using a bacteria-killing deodorant and watch your pits take a walk on the clean side. You'll notice that the more thorough you are about banishing bacteria, the longer you can go between freshen-ups. It's really all about bacteria. You’re not neutralizing odor, you're killing it at the source.